I actually walked twice today (more on that later), and the second time I was rather in a hurry, so perhaps I was walking more briskly than usual. In any case, I had picked up the pace enough to be panting slightly. As I zipped along, at one point I realized that only by virtue of exhaling (blowing) at just the right moment had I avoided getting a bug in my mouth. 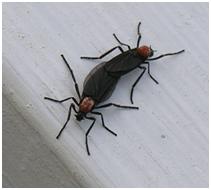 I’m surprised, actually, that this hasn’t happened sooner. You see, it’s lovebug season here. In case your area of the country/world is mercifully free of these critters, let me introduce you. Lovebugs (Plecia nearctica), also known as honeymoon flies, telephone bugs, kissy bugs or double-headed bugs, are a variety of march flies, which you can read more about in Wikipedia. They appear in two “flights,” in April–May and August–September. Their distinguishing characteristic is that they appear almost exclusively in pairs. Contrary to popular belief, they don’t really copulate in the air; they just like to hold hands. According to an article in the Press-Register:

What we see is the cuddling before and after the copulating.

If you see the little black and orange flies swarming without mates, they’re males trying to pick up a date. The more sensible females are hanging out on leaves of plants and trees. When the swarm of males come by, the females jump into the mix and hope to find a mate.

Once they get together, lovebugs fall to the ground to discreetly copulate—the insect world’s version of “getting a room.” When you see them in the air, the male is entwined with his lover so another male can’t cut in until it’s time to move on.

In case this sounds harmless, the flies are an incredible nuisance, as their lives are brief and their end is sticky. If their corpses are not washed off cars and other surfaces quickly, their acidity can cause lasting damage. And they can pile up into a nasty mess wherever they are. Although individual flies live only four days, each season (“flight”) lasts five weeks, which can seem like an eternity.

I began this post on a jocular note but must conclude on a more serious one. It was not just “a bad day for mouth breathers” but a tragic day for some of our neighbors, which is the reason I walked twice today. On the radio this morning, the local news broadcast mentioned a house fire in our neighborhood, and when I headed out around 7:30 this morning, I thought I might see where it was. In fact, as soon as I turned the corner, I could smell the pungent aroma of incinerated house. When I saw a truck a block ahead spraying water, my heart leapt into my throat (to use an original phrase), as I feared that the burnt house might be the historic old house on the corner (the one where I saw the trumpet vine). Thank goodness it was not, and in fact the truck turned out to be a “water buffalo” watering the plants in the flower beds at the intersection.

As I reached the corner, however, I saw that a block of the cross street was blocked off. This did not surprise me, as I had already noted the unusual amount of traffic on our street, detoured from this main thoroughfare. The firemen were still on the scene, and the street and sidewalk were full of ash and water. I deviated from my usual route to walk past the house. It was a total loss. I hastened home to report this to my husband.

It was not a historic old home. In fact, it was a relatively new one, but a very tasteful one beautifully built in the vernacular style and much admired by us in the neighborhood. If it has been determined what caused the fire, I have not heard (one news source is attributing it to an “unattended barbecue grill”), but my husband did settle one question we had.

Last night, shortly after we had gone to bed, just as we were drifting off to sleep, about midnight, we were startled awake by a loud noise that, in our drowsy state, we could not identify. Nothing seemed to be wrong, so we went back to sleep. In talking with the firemen this morning, he learned that it had been an explosion: while the firemen were fighting the fire, an oxygen tank exploded. If we had gotten up and looked out our bedroom window, we could probably have seen tongues of flame and clouds of smoke above the trees and houses between us and the burning house two short blocks away. But we didn’t.

At any rate, my first walk was quite short—only ten minutes. Later I went back out and did the full circuit. By this time an ATF agent was clearing the barricades to open the street to traffic again, and the disaster had attracted quite a few rubberneckers. Still later I saw a local TV news van on the scene, and of course it will be a big story.

This entry was posted in Uncategorized. Bookmark the permalink.