About six months ago, I was invited to join a Facebook group called “Language Snobs ‘Я’ Us.” The group includes some other copy editors but is mostly made up of people who are serious about correct grammar (in the broadest sense of the word) and enjoy deriding its misuse, as seen in signs (grocer’s apostrophes, for example) and on social media. (Another frequent target of the group is pretentious but illegible script; the members of the group refer to themselves as “snoles” based on the appearance of the word “snobs” in some unfortunate font.) For some reason lost in the mists of time (before I joined, anyway), pirates are also a theme of the group, so it seemed perfect to me to post this cartoon (original seen here):

I had not anticipated the backlash of confused and uncomprehending replies. I had thought my point was quite clear, but it seems that it flew right over the heads of most of the group.

The verb use is a very useful one, used in a multitude of ways. (Although management types, apparently feeling use was too pedestrian, have attempted to promote the substitution of utilize, that use has been deservedly ridiculed.) The entry for use in Webster’s Third New International Dictionary, Unabridged is 8½″ long. And that doesn’t count a separate 1″ entry for the participle used, both in its meaning of “partly worn out” or “secondhand” (as in “used car”) and in the sense in which I used it in my title (meaning “accustomed”).

Nowhere in the entry for the verb, however, is there any suggestion that the syntax or conjugation of the verb is different in any of its specialized uses, although the dictionary does note that “used” is pronounced differently when used with “to.” The definition that applies to the example above is entry 1b of the intransitive use of the verb: “used in the past with to to indicate a former state.” The examples given are “winters used to be harder,” “isn’t going to take as long as it used to,” and “didn’t use to have a car.”

Note especially that last example, because it is only when “did” (or in this case “didn’t”) comes into play that we run into trouble. “I used to enjoy [whatever]” becomes “I didn’t use to like [whatever]” or “Did you use to [whatever]?”

In the cartoon example above, there should be no difference in syntax from “What did you use to get the stain out of the carpet?”

To illustrate this using a different verb, consider this sequence:

You say to your wife, “I thought you were going to go to the grocery.”

You wonder when she went, so you ask, “When did you go?”

Because the necessity for this kind of construction occurs so rarely, it is hardly surprising that it hardly ever appears correctly. But I did find two encouraging examples. I’ve just finished reading Laura Ingalls Wilder, Farm Journalist: Writings from the Ozarks, edited by Stephen W. Hines. It’s a collection of columns Wilder (writing as Mrs. A. J. Wilder) wrote for the Missouri Ruralist magazine between 1911 and 1924. In a column published June 15, 1921, she wrote:

Did you ever hear anyone say, “I don’t know what the world is coming to; people didn’t use to do that way; things were different when I was young,” or words to that effect? [Emphasis added]

And in a New Yorker video, “For the Love of Bread,” a closed caption reads, “Bread has become a menu item in a way that it didn’t use to be.” 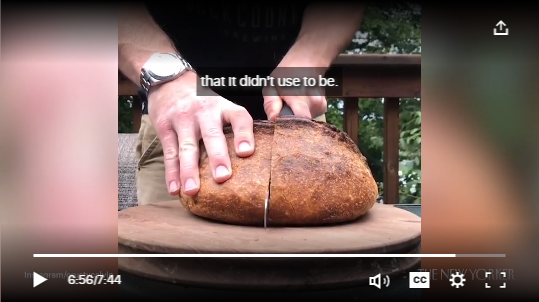 It’s impossible to be sure what the speaker actually said, but at least the caption writer got it right!

This entry was posted in Language. Bookmark the permalink.