Yard Work in the Rain

I often say that the combination of OCD and ADD is not conducive to efficient yard work. Though I’ve never been diagnosed with either, OCD (which anyone who knows me will say I have) dictates that I finish whatever I start, and something very like ADD leads me to keep expanding the task to the point that eventually, inevitably, I have bitten off more than I can chew.

Which explains why, four hours into a stretch of yard work yesterday, even though it was clear that the forecast rain had in fact materialized, I kept raking up more and more leaves and pine straw, in the full knowledge that every bit of debris I raked up would have to be hauled to the street. It wasn’t really raining hard—just a light drizzle, really—and I was under the cover of trees, wearing a cap with a bill that kept rain off my glasses. Still, by anyone’s definition this would seem to be a form of insanity.

On the other hand, it might seem to some that the project itself was pretty crazy. Hurricane Sally did a number on our area in September. Fortunately, our yard got off light, and within a few days we had finished clearing up our debris and were working on our out-of-town across-the-street neighbor’s. One area that was especially hard hit was a few blocks away, where, in one yard, several large trees uprooted, bringing down utility lines, blocking the street, and breaking up the sidewalk. Over the next few weeks and months, the street was cleared, new utility poles were erected, and new power, phone, and cable lines were put up (and eventually the old utility poles were removed). The sidewalk is still a mess, the worst part marked by orange cones, but this is clearly not a top priority for the City, which, with the help of FEMA contractors, is still working on picking up roadside debris.

Next door to the house where the trees uprooted is a vacant building. The nucleus of this building was built in 1908 to house the personal library of Marie Howland, which had become the town’s first public library. You can read the curious history of this library here. In 1983, the library moved to more spacious quarters in the Municipal Complex and in 2007 moved into a new, purpose-built building. When the library moved out of the small building on Summit Street, it was leased to the University of South Alabama – Baldwin County for use as an administration building (USABC operates out of several properties scattered around town). In June 2020, the latest lease expired, and USABC opted to move its administration operations into another property leased from the City. It’s possible that the property was properly maintained from that time until the hurricane, but little had been done since.

The building (which I’ll call “the old library”) is on my daily walking route, and I became increasingly saddened by its condition. When we moved to Fairhope in 1980, we were pleased to have this library only a couple of blocks from home. While our son was attending what was then Fairhope Primary School (grades K–3), he passed the library every day on his walk home and often stopped in to check out books. Our daughter attended weekly “story hour” programs, and both children were involved in the Summer Reading Program. So the library had a lot of happy memories for us.

After months of enduring the sight of downed branches all over the lawn and general untidiness (and realizing that this was not going to be high on the City’s job list), I decided to take the bull by the horns. On December 22, I headed up to the old library armed with a rake and clippers and set to work. That first day I worked over four hours; the next week I put in nearly another four. It was clear that the property had been neglected for some time. One day I hauled out large hunks of tree as big around as my leg that had fallen into the shrubbery behind the building. A small copse on the east side of the property had been completely taken over by sticker vines. I kept wishing I’d taken some “before” pictures for comparison, but I was proud of the large piles of debris I was able to accumulate for the City to collect, and pulling down those vines was very satisfying work even if it did result in a few scratches.

The following week my work was interrupted by roofers, but by mid-January I was back. The roofers had cleared a path around the building, as well as the various walks leading up to it, but they’d done it by blowing debris back under the adjoining shrubbery, from which I raked it out and collected it. I spent five hours on January 14 and 4½ more on January 29. Large portions of the property are covered with a particularly aggressive and obnoxious ground cover (vinca?) that sends tendrils out across the sidewalks, making raking and sweeping difficult. I had started attacking those one at a time with pruning shears but yesterday went armed with hedge clippers. I ultimately found, however, that it was more efficient (not to mention more satisfying) just to yank the vines out by hand!

Two passersby (our mail carrier in his truck and a fellow Rotarian on foot) asked me if I was the new groundskeeper. I replied that mine was strictly a volunteer position. But I don’t think the City could afford me, anyway. On a previous visit, a lawn service employee working in the yard next door told me he had previously been contracted to maintain the old library property, but it was strictly a “mow, blow, and go” job; he wasn’t authorized or paid to do any weeding, pull down vines, etc. I suspect the property hadn’t had any real TLC since, in its library days, it had been tended by the local garden club.

On my previous visit, I had collected four good-sized piles of leaves and pine straw and a large pile of sticks and branches. The City (or someone) had done a mediocre job of collecting three of the four leaf piles and apparently entirely ignored the rest. So yesterday I started by raking up all the remaining debris from the individual piles and hauling them (10 trashcan loads) to a single pile (next to the pile of sticks and branches) too large for the City to ignore. I also added several large branches to the branch pile.

It had rained earlier in the day, so the leaves were already wet, and they got wetter with the new rain, which made them heavier to haul (not to mention muddier). Sweeping a wet sidewalk was also harder. But my guiding principle is that I will not leave the place messier than I found it, and I was also motivated by my mother’s adage about getting wet: “You’re not sugar; you won’t melt.” I persevered, but after 5¼ hours I was ready to go home and have a hot shower and a cold drink! 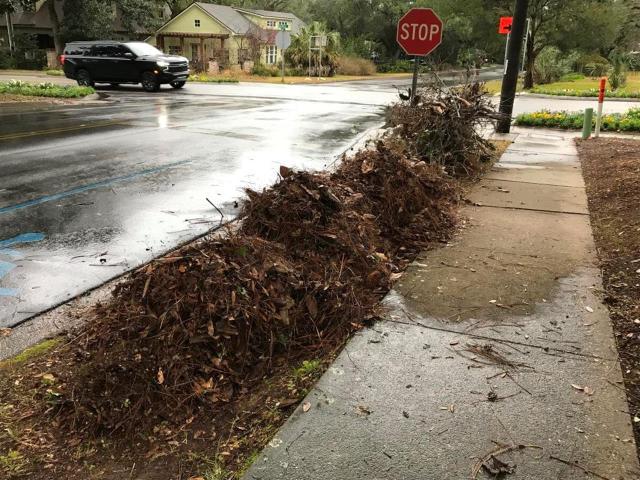 This entry was posted in Yard Work. Bookmark the permalink.

2 Responses to Yard Work in the Rain