In more than five months of raking and digging up leaves, sticks, vines, and roots at the Old Library, I have uncovered quite a few nonvegetative objects. Some of them were not unexpected. Hurricane Sally knocked down part of a wooden fence at the property line and blew shingles off the roof, so it’s no surprise to encounter bits of shingle and lengths of broken board (though I did wonder about what appeared to be the leg of a small chair or table or ottoman, seen left of the brick in the photo above). The City had the roof replaced a few months ago, and, sure enough, a few roofing nails went astray (one ended up stuck through the bottom of my shoe!). And, although it saddens me, it doesn’t surprise me to find glass bottles, aluminum cans, bottle caps (metal and plastic) and remnants of paper and foam cups (even one red Solo cup!). Shreds of (apparently) biodegradable plastic bags also turn up. Just today, after taking the photo above, I unearthed the red Solo cup, another beer bottle, the blue plastic cap of (I’m guessing) a Dasani water bottle, and a Doral cigarette pack.

Fluorescent tape flags and markers bear witness to various City activities around the property, and the wealth of seemingly electrical-related bits and bobs mostly turned up in the vicinity of utility poles. It’s no surprise that they required work given the state of Magnolia Avenue after Sally.

Assorted plant markers attest to someone’s previous effort to beautify some property, though probably not this one, as none of the described plants can be found there. I’ve also found plastic plant pots (empty) and what I thought was a portion of a large terra cotta pot, which turned out to be terra cotta sewer pipe!

Some of the roots I’ve been digging up seem to be as tough as wire—and then there were the ones that were wire! Apparently a hog wire fence predated the current wooden fence at the property line, and parts of it were still underground. 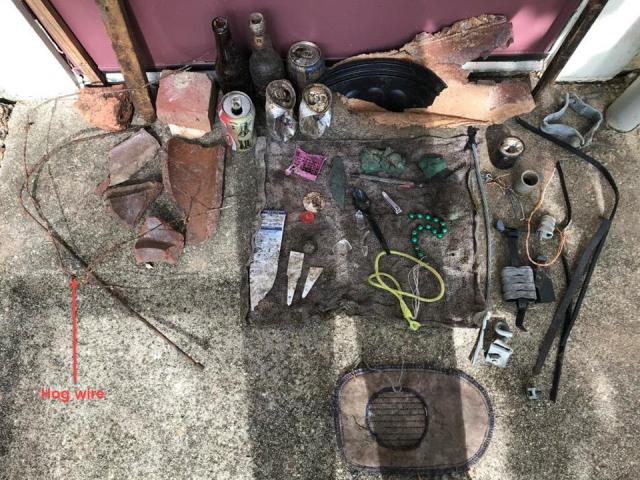 Miscellaneous other finds included a bent and rusted piece of metal, two ten-foot lengths of threaded rod (not shown), fragments of broken glass, a mechanical pencil, a plastic spoon, a perfectly good nail clipper, a length of yellow cord, chunks of some sort of green ceramic material, a short length of a string of Mardi Gras beads, a tennis ball, and a perforated pink plastic box (?) that may have been part of some toy (there’s a child next door).

None of these finds, though interesting, is inexplicable, however. That distinction is reserved for the two fabric objects in the photo above. Underneath the small miscellaneous items is a terrycloth towel or washcloth that must once have been dark blue or grey (I don’t think it could ever have been white). This is the second such I have found, thoroughly caked with dirt and embedded roots. My first thought was some kind of shop towel, though apparently nowadays those are mostly disposable nonwoven cloth. At any rate, it’s hard to understand how these found their way here unless perhaps they were being used by a maintenance crew. The other item (at the bottom of the photo) is what appears to be a dust mop refill. Did this just escape from a garbage can? Surely it can’t have had any practical use outside!

In the 40+ years we’ve lived at our house, some odd things have surfaced in our back yard, though mostly they have been rocks and chunks of concrete and occasional broken glass, certainly nothing as interesting as the objects above!

This entry was posted in Yard Work. Bookmark the permalink.